Last Friday I spoke at the Northgate School commemoration for Jo Cox.  Jo Cox MP was murdered by a lone racist fanatic for standing up for all her constituents, not just one section of the community.  She famously said that we have far more in common with each other than things which divide us, and this is written on her shield on the wall of the Chamber of the House of Commons.

The guest of honour was Frank Bright, a Holocaust survivor who lost most of his friends and family. There has been a long and terrible history of racist attacks and oppression throughout the world, but surely the Nazi attempt to exterminate the Jews during the Second World War has to stand alone as a uniquely horrifying and despicable act.

Most of us were not yet born in 1945 when the Second World War was finally won, but we can be proud of our parents’ and grandparents’ generations who worked so hard to make sure that Nazism was defeated.  Sometimes, though, some of us forget what caused that war and why it had to be fought and won.  Hitler came to power by stirring up hatred – against foreigners, black people, gay people and disabled people, and in particular against Jews.  Once he became Chancellor, having filled his country with hate, it was inevitable that he would take Germany to war, to show the German people that he was right and that every other nation was inferior.  It was no good other nations, such as Britain, pleading with him to keep the peace.  The best way to avoid war would have been to prevent the vicious Nazi regime from coming to power in Germany in the first place.

Hatred leads to war and destruction, not just of the hated but also of the hater.  Even where there is no war, hateful and divisive regimes such as apartheid rule in South Africa or the military dictatorship in Burma have impoverished the societies they govern, set citizen against citizen, and created divisions which can take hundreds of years to heal.  Learning to avoid hate is a moral act for an individual, but for a society it is a matter of self-preservation.  We need to recognise all the things we have in common and work together in mutual respect – if we don’t, we may not survive.

So you can imagine how horrified I was when some Jewish constituents – life-long residents of Ipswich – came to tell me about abuse and discrimination they have faced in our town.  One lady told me about insults said to her as she went to buy her Jewish newspaper – abusive and threatening words from a complete stranger in a public place in front of many others, simply because she was buying a Jewish newspaper.  Her husband told me about a family member who had been refused service in a fish-and-chip shop because the person behind the counter didn’t want to serve Jews.

This is completely unacceptable. I feel ashamed that any such thing could happen in the town I represent.  I am sure that the vast majority of Ipswich people are as horrified as I am.  We all have a duty to call out antisemitism like this whenever and wherever we see or hear it.  We need to make sure that any bigots in our midst who think this is an acceptable way to behave are left in no doubt that the rest of us won’t put up with it.

Over the past few years, as a County Councillor and then as MP for Ipswich, I have visited St Mary le Tower, the Baptist Church in Westgate, Hope Church on Back Hamlet, the Church of Jesus Christ of the Latter Day Saints in Sidegate Lane, the Hindu Samaj, the Sikh Gurdwara, the Mosques in Argyll Street and Bond Street, and Baha’i and Humanist events too.  I was due to visit the synagogue in Colchester for its 50th Anniversary in early July,  because many of Ipswich’s Jewish residents meet to worship there, but sadly they have recently lost their leader and the service has been postponed. I am always ready to listen to people’s experiences, good or bad, whatever their background or beliefs.

We all have a duty to root out hatred and bigotry – not just from ourselves but from the society we live in – and that very much includes anti-semitism.  I will continue to do whatever I can to make sure that anti-semitism does not become normal again, either in our town or in our politics. 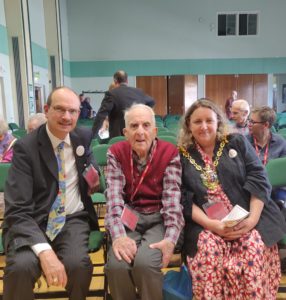