On the wall in my office, I have a photo of a large number of Ipswich Conservative members, including local Councillors, bearing placards claiming “Sure Start SAFE with the Conservatives”. They had gathered in front of the Treehouse Children’s Centre in order to disrupt a visit from Harriet Harman, who was Minister for Women and Equalities at the time, to see how successful and well-run our Sure-Start Children’s Centres are. Shamefully, they accused her of lying when she said that she expected an incoming Conservative Government to close them. They then closed 9 of them in 2015 and are now threatening to reduce the remaining 38, leaving just 16 full-time Centres, and 9 part-time Centres across Suffolk.

I am delighted and relieved that the Treehouse has not been closed, does not appear to be in danger of being closed any time soon, and is going from strength to strength. That doesn’t mean that it couldn’t be better. The reason Labour set up the Children’s Centres in the first place was because there are too many families where parents don’t have the resources or skills to give their children the best possible start in life, and so I would like to see far more being done to make sure that those children are being brought to the Centre. At the same time, it is really important that the Centre should be for all families and children – far too many barriers are put up in this country over such things as tax credits or free school meals which run the risk of stigmatising people who need them. In many cases people just don’t claim means-tested benefits. Sure Start, like Health and Education, should be free as of right to all.

There are some vital services which Labour wanted Children’s Centres to offer which have now been stopped. For instance, we used to have a dedicated Children’s Centres benefits advice service. It cost a significant amount to run, but secured at least 10 times as much for desperately vulnerable women who were most in need of benefits. There are some people who don’t believe our country should pay any benefits to anyone but surely, if you don’t want to go back to children starving on our streets, the people who are most in need of benefits are mothers with small children who in many cases are not even aware that they are entitled to claim. Labour Councillors at Suffolk County Council warned at the time that cutting this service might result in more families in destitution being broken up and more children being taken into care. The service was cut. More children are now being taken into care. I can’t point at any particular cases where there is a direct connection, but does anyone seriously think there is none?

To be completely accurate it was not the Government which decided to close Children’s Centres – they left the dirty work to their Conservative County Council colleagues. Between 2010 and 2015 Suffolk County Council closed 9 of the Children’s Centres and seriously reduced the services in the rest. Their claim then, and now, is that the Government has not left them with enough money to provide a Children’s Centre for all. Leaving aside the argument about the cost to society of NOT supporting our children to be healthy and confident and good learners, where is the equity in keeping some Centres but leaving other areas of need without a centre at all, or one which only provides very limited services? Whether it is mainly the County Council to blame, or mainly the Government, the fact is that a political decision has been taken to run down the whole Sure Start Children’s Centre programme.

This failure to support and build on the provision of Children’s Centres, to keep families together and to boost our children’s abilities and confidence, will damage our society for the future. But over and above that, it is a shocking example of politicians making solemn promises before an election and then failing to keep them once elected. That’s why I asked the Prime Minister on Wednesday what guarantees her Government could give on anything which would convince the British people in future.

Whether it is their promises to build more houses for young families, to improve the funding for schools, to halt the privatisation of the NHS or to increase the income of the low-paid, the Conservative Government has bombarded the electorate with hollow words. I do not believe their words will be taken seriously again. 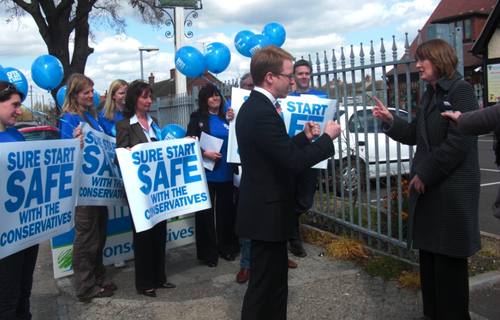